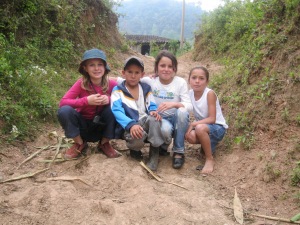 Fiercely with some kids on a path, Cleverly with a friend

So we arrived at the village.  Unannounced.  After 14 years.  It was beautiful!  Somehow word had traveled, it had something to do with someone who rode in the truck bed getting a ride up the mountain.  I’m sure Bartolo had told people, since I later found out everyone in the village had a cell phone and was in contact with the GROUP of young men from the village that had settled near my neighborhood in the US.  That’s right, I learned on this visit that in the US I had neighbors about 20 blocks away who were from this tiny village.  We rode the same buses, shopped at the same grocery stores, and negotiated inner city life nearby each other for almost 7 years!  I had to go back to the village to find this out.  The strange thing was, I had lived in Ohio when I joined the Peace Corps, but I ended up on the East Coast.  They were from the village and ended up 20 blocks from me.  The coincidence absolutely floored me. 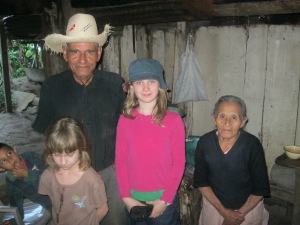 The village with cell phone tower!  Fiercely and Cleverly with Bartolo’s parents!

Anyway, there was a happy reunion as people ran down to the road to the truck and word spread quickly.  All of the children I had known were adults now, of course, many with children of their own.  We were surrounded by a growing crowd and shouts of “gringita!”.  Now, don’t think I get a big head about this because although we do have a lot of love for each other, I am aware that the village is a tranquil, one might say boring, place, and any entertainment is always welcome.  When I lived there, I was a constant source of entertainment as people passed by my house to see how the gringa lived.  There was one television powered by a generator.  Computers and cell phones were unheard of.  Church and soccer games on Sundays were a big deal.  And now the gringa had returned – with children!  This was front page news.  There is still no electricity there, BTW. Wires are placed, but “the government hasn’t connected them” I was told by locals. 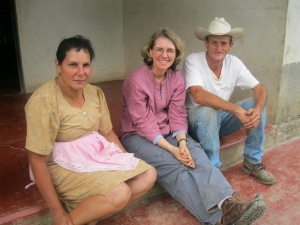 Marta and Chema – parents of my Honduran family. They have about 12 kids, several are my neighbors in the US and some are still home with them.  They built a new house with this nice kitchen with funds sent from their kids working in the US.

Horses in front of old wooden house, laundry drying next to new house

We first went to my Honduran family’s house.  It was so good to see them.  They were doing great.  Their house was a large, tidy cement structure uphill from their house I remembered, currently used for storing grain, which was wooden with a dirt floor.  From the porch of their new house, they called their son Ever “in America” and I spoke with him.  He told me where he lived and I almost passed out!  I had travelled over 3,000 miles and Ever was talking to me from my neighborhood back in the US!  It was truly a moment I will never forget within an amazing day I will never forget. 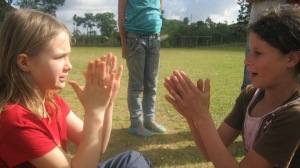 Fiercely playing a hand-clap game, kids in the coffee field with banana trees and Cleverly looking a little brava

We were shepherded around like royalty, or like long-lost family.  We were given “pan dulce” (sweet yeast bread, made like cake on special occasions) and lots of coca-cola until we felt sick from all the polite eating we had to do.  We were shown photos (on a laptop!) of a local wedding we had missed by a couple of weeks (darn! would have been fun!).  Fiercely ran around with village kids almost from the get-go, but Cleverly hung back and sulked a little, earning some gentle teasing with the nickname “Brava” which is what they call a rude dog.  She warmed up eventually and made a friend. 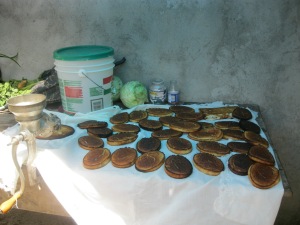 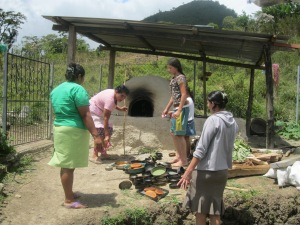 Cleverly and Fiercely spent the week running around with village kids, also helping with some chores like baking pan dulce, doing laundry, and picking avocados.  I visited and was visited by people I had worked with and general people I remembered, and some I didn’t.  I loved how I was welcome everywhere, both as entertainment and because Hondurans are genuinely excellent hosts.  I could literally walk into a stranger’s house and they would chat with me for a while, people would call to me from doorways as I walked by.

It was just lovely to see Don Berto’s farm where he was practicing natural farming that we had worked on all those years ago.  And he was as energetic and full of stories as always, giving us a tour of his medicinal plants, crops, and his hilly little farmland a short hike from the village.

Picking avocados from the tree, walking through the center of town – church on left has new towers since I lived there, blue building used to be a school but now for meetings