me with some wooden boats

We decided to visit Tela, where my parents had also visited back when I lived in Honduras.  Tela is a beach town east of San Pedro and we drove there in about 4 hours.  Again, the roads were fine, becoming flat as we neared the coast.  We were heading towards areas that had been affected by Hurricane Mitch about a year after I had last visited (Mr Fantastic and I took a trip to Honduras in 1997).  The hurricane was devastating to the country, far worse than surrounding countries, destroying entire villages and killing over 14,000 people.  I am not sure how average Hondurans affected by the storm have done since then; the mountain village I know did not experience severe problems (although my outhouse collapsed in the heavy rains, villagers told me!)  According to this writer, Honduras has done well recovering from Mitch.  The roads in the northern coastal area are used for international commercial interests in bananas and palm oil, so these roads were repaired soon after the hurricane.  I cannot say that this directly benefitted residents there.  A lot of the damage seems to have taken place more to the south, notably in the capital Tegucigalpa, where we did not venture on this trip.

We stayed at the Hotel Cesar Mariscos, a moderately nice hotel on the beach.  We could walk all over Tela from there, which we did.  We also took two day trips.

My parents and Fiercely at Lancetilla

The Lancetilla Botanic Garden is just outside of the town of Tela.  Apparently, it is the 2nd largest botanical gardens in the world.  The kids were mildly impressed; my parents and I loved it.  we had a guided tour and saw the bamboo forest, orchids, and heard stories of historic trees growing there. 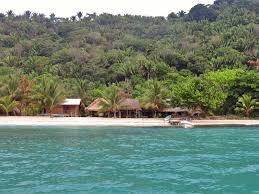 We also took a nice day trip to Punta Sal National Park.  There are tour agencies that have trips there including a boat ride to/from the area (the peninsula is not accessible by car), hiking to ‘Hidden Port’ cove and in a rain forest, snorkling and lunch.  I had done this trip when I lived in Honduras and it is nice, though much more crowded than before.  There were several tour agencies with their boats there when we went, but the beach is large and it doesn’t feel over crowded.  We took a brief hike through a rainforest to the cove on the other side and actually saw a poisonous snake, a barba amarilla.  I remember being warned about them when I lived there.  Our tour guide handled the situation well and kept our distance, telling us later about the snake we had passed.

in the center square in San Pedro Sula

After a few days in Tela, we headed back to San Pedro Sula and spent a day there.  We found a nice museum, Museo de Antropología e Historia, we walked to and spent an  hour or so looking at the exhibits about the natural and cultural history of the area.  That was the end of a great trip!  We did get harassed a little at US customs on the way home (Fiercely had not signed her passport with her full name – sheesh) but strangely enough they didn’t notice the weird herbs a village woman had sent via me to her husband in the US, so I guess all’s well that ends well.